A few months ago, UIDAI was clouded with uncertainty about the vision and mission of UID. The point of contention was NPR and UID. Both these initiatives were based on a similar foundation: creation of a centralized identity register. The EoGM was supposed to conclude on the merging of the two initiatives; however that was never done. This delayed decision making led to the outburst in media between PC and UIDAI Chairman in late 2011, early 2012. A lot of speculations were being made about UIDAI's existence, about corporate celebrities not surviving in the government system, and what not…..the real reason for this friction was because of the rivalry between the Finance and Home Ministries - UIDAI is housed under Finance Ministry (via Planning Commission) where as NPR is housed under Home Minstry(1)

And then during late January, both the entities decided to wave white flags towards each other. There was an agreement, thanks to the Prime Minister. And the agreement was truly a neutral, diplomatic agreement to keep both the entities satisfied. Just another classic example of how Indians avoid confrontation, they shy away from dealing with the real problem instead chose to make a temporary fix to the burning issues. The decision - both UIDAI and NPR have split the work of enrollment: UIDAI is allowed to enroll 600 M (400M in addition to the 200 already enrolled); whereas NPR is allowed to enroll the remaining residents. NPR will work along the coastal and international border areas mainly; in addition to the allocated geographies! (2)

However, what puzzles me is (and I have not managed to find answers) is the cause and genesis of NPR. NPR's website clearly states that creation of NPR is for (3):

NPR database is created in the following manner: (4) 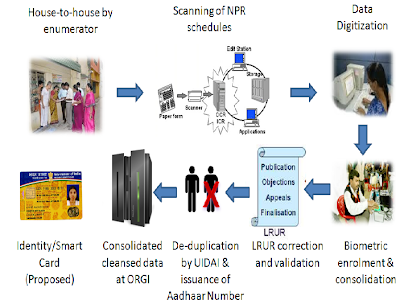 Demographic data is collected as a door-to-door activity, the data is captured in NPR schedules - paper-based forms. The data is then digitized by scanning the NPR schedules and applying ICRs (Intelligent Character Recognition SW).

Biometric data is collected via camps - the hardware equipment and registrars used for biometric enrollment is essentially the same as the one used by UIDAI. The biometric data is then sent to UIDAI's database for de-duplication and generating an UID number.

So, for the areas where NPR is responsible for doing enrollment, the database can be shared but vice-versa has not been addressed at all.

So, to summarize the duplicity of UID and NPR leaves a lot of questions unanswered:

(1) Sharing the data between NPR and UIDAI

UIDAI has been building Aadhaar enabled payment systems, Aadhaar bridge gateway, opening up the authentication interface for a cloud-based Aadhaar service etc. However, I have not seen any plans on NPR for using the database either for security purposes or for other social benefits

(3) Duplicity of storage and maintaining the infrastructure

For 1.2 Bn Indians/residents of India, ~9.7 PB of data storage is needed for UID and a fraction more for NPR.

Approx 10 PB of data is equivalent to 200 Million four-drawer filing cabinets filled with text OR ~133 years of HD-TV video!(6)

The costs involved in the storage and managing such infrastructures is humungous - are we really duplicating all of this? I hope the decision makers have given it a "good" thought, otherwise your money and mine is being used for initiatives which are not only redundant but also reap no incremental benefits to the common man!